Two guys played in their garage tinkering with computer stuff for years: they became rather successful.

Do you know who they are? You’re very possibly holding their Apple product in your hand.

Curiosity and education: we know they work hand-in-hand.

A good long while ago, there was also a curious artist and scientist who wondered why the shifts in constellations occurred. The church didn’t like his conclusion.

In fact, the church government was ready to have this man’s head, literally.

If he continued his blasphemy against the Scriptures: because clearly, obviously, the Scriptures declared the Earth was at the center of the Universe.

Despite accusations of blasphemy and living under house arrest for the rest of his life, his seemingly questionable theory that the earth was rotating around the sun later became a scientific fact.

“If you can imagine it, you can create it.

If you can dream it, you can become it.”

In a TED talk titled, “How to escape education’s death valley,” Ken Richardson had a lot to say about how schools kill creativity.

Here are the things I’ve learned about curiosity & education and how to facilitate it.

Maybe they’re not interested in the topics we want to share with them. Maybe they have different interests than ourselves, but they are curious.

Though I have plenty planned for each study year, I know that the best avenues to pursue are those aroused by the ones I hope to engage, my children.

“Everybody is a genius, but if you judge a fish by its ability to climb a tree, it will live its whole life believing that it is stupid”.

2. If the kids are interested in something, they will certainly absorb and learn. The role of the teacher is to facilitate learning. That’s all, folks.

Join the Deschool Intensive to Bring Individualization & Freedom to your Homeschool

3. If my children ask questions, I should listen and help find resources to answer their questions.

If they’re asking questions, it means they’re thinking. They’re digesting something that I’m sharing with them or heard about somewhere that they want to explore.

4. Let them be explorers.

Give them plenty of time to free play and when you’re doing any formal lessons, watch for signs of overwhelm.

Too much lap reading time, too much writing, too many math pages, or too much of any activity (even television shows or gaming) can just be too much if they’re not interested.

But I am a mother of four.

It is not possible to answer every one of my kids’ questions.

(I can’t incarnate Google or God).

However, I can recognize that their constant questions and curiosities can be used as starting points for introducing geology or logic or world economics, or any number of other interests.

5. Are you worried that you don’t know everything? Well, of course, you don’t!

Teach them how to answer their own questions and lead them to resources.

But definitely assume their curiosities are the starting point to their education and let them do their thing.

“Your teacher can open the door, but you must enter by yourself.”

6. When the cup is full, stop filling the cup!

But add just a little bit more grammar, or French, or history, and that little bit might be too much. Anything more will not be received into their comprehension or memory.

So don’t overwhelm their system with seatwork or bookwork or formal lesson plans.

Overwhelm the system with too much social interaction, too many activities, and too many lessons, and it’s still just overwhelming.

How much is too much?

You will see it in their fidgetiness, resistance, or unhappiness.

The busier and more active our schedule becomes, the more challenging it is to take in information (said everyone, but especially kids).

Overwhelm their senses, and things will get unpleasant.

The more freedom they have to just think, the more potential for cuing their creativity.

Join the Deschool your Homeschool Intensive

7. Boredom is a good thing: a natural education is found after boredom begins.

When someone shares “Mom, I’m bored,” it means they’re just about to crack a code, unlock the secrets to the Universe, or discover the cure for cancer, maybe…

…or that they are on the precipice of pursuing a new interest that might lead to one day cracking a code, unlocking secrets, or curing diseases.

At the very least, it opens them to developing their interests and aptitudes and building their present interests (aka educating them).

If you sit kids down, hour after hour, doing low-grade clerical work, don’t be surprised if they start to fidget. Curiosity is the engine of achievement. Teaching is not a delivery system…education is about learning…

Join the Deschool Intensive to Bring more Freedom, Purpose & Individualization to your Homeschool

Don’t be afraid of boredom, mama: curiosity is found in those boring moments.

Maybe my child won’t crack a code, unlock the secrets to the Universe, or discover a cure for cancer, but each of them will find meaningful things to occupy their time in this world when we trust them to occupy their own time.

The kids might put on goofy plays titled Pranky, where a girl plays a prank on another little girl. It’s a silent film, complete with a five-year-old Master of Ceremonies, and tickets for fifty cents. Popcorn is available too (at a price, of course, despite you purchasing the kernels).

There might be treehouses built in the backyard where the playground swings are dismantled and reattached to a tree, decomposed autumn leaves raked into separate rooms, and cardboard boxes made into cars.

And an afternoon of a quiet hour inside for you as you watch them happily play.

There might be extra guitar practice, piano playing, reorganizing of bedrooms, and painting of fingernails.

Or a spontaneous bedroom spa, which might mean you shelling out two bucks for a back massage, cucumber water, and toenail painting for you!

8. I should not assume that a filled schedule, a stocked library, perfect answers, daily lesson plans, or even written work are the keys to educational success.

Because education is not a product, it is a way of life.

Education is not the filling of a pail, but the lighting of a fire. 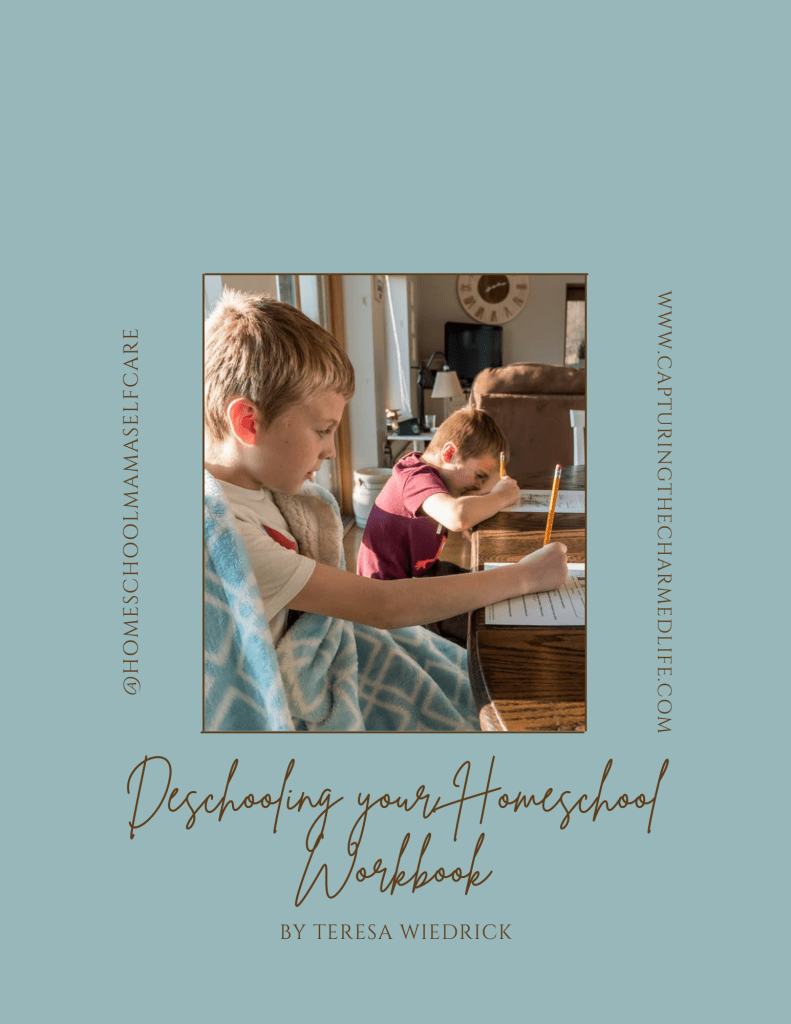